The Stage is Cleared at Münchner Volkstheater‘s New Building

New venue handed over after three years of construction

The construction project for Munich People’s Theatre, Müncher Volkstheater, was completed successfully and on time. The finished complex on the old stockyard’s premises in Munich was handed over to artistic director Christian Stückl on 18 June. At the end of 2014, the City of Munich decided on a new building for the theatre – the old venue at Brienner Strasse had initially not been authorised for theatre operation and reached its limits after spectator numbers continuously increased.  Construction started in 2018. The project was always implemented within a fixed team of construction company, designer and architect. SSF Ingenieure signed responsible for structural engineering of the existing building as well as the new construction. The new complex comprises a main stage, side stage, rehearsal stage, dressing rooms, foyer, administration, workshops and storage. The old building, subject to monuments protection, houses the offices of the artistic management and administration – this building was renovated and comprehensively restored in the framework of the construction.

We are glad to contribute to Munich’s new cultural venue with this successfully completed project. The new theatre season will start in October. 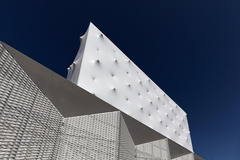 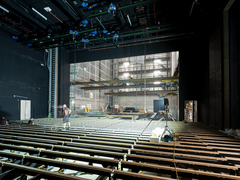 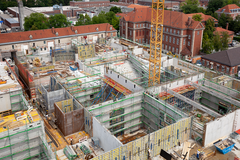