The expansion of motorway A96 between Oberpfaffenhofen and Germering South is completed. Now, traffic runs on six lanes on the motorway leading from Munich via Memmingen to Lindau. Traffic had significantly increased on this section after completion of the western expansion of motorway A99 led to a higher traffic frequency. Around 78,000 vehicles daily exceeded the capacity of this section, and especially during peak office and holiday times led to many delays.

The expansion has several advantages. On the one hand, the six lanes reduce traffic jams, on the other, residents benefit from improved noise protection. The existing noise barriers were enhanced and extended. In addition to erecting noise barriers, a 520-m long gallery was built near Gilching and another 965-m long gallery near Germering, each over the lanes to Lindau and partially built on existing earth walls. The galleries are closed on one side and open on the side facing away from buildings. A 1.30-metres high noise barrier is placed on the galleries to additionally dampen traffic noise. In areas close to towns, a noise-reducing road surface was applied.

SSF Ingenieure signed responsible for the design of both galleries. Detailed information about SSF Ingenieure’s scope of services at the galleries can be found here: project. 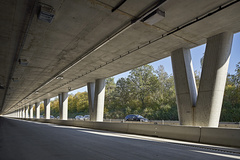 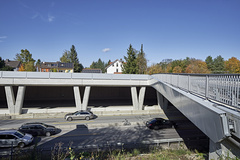 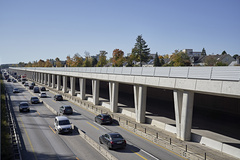