Currently, this is the largest construction project in Munich with the goal of alleviating the overloaded regional train system which can hardly deal with the constantly increasing number of passengers. The project of the 2nd main line started in 2001 with a feasibility study and in 2016 the State of Bavaria and the German government gave the final financial approval.

Since then, several optimisations have been made to the line's design, the tunnel as well as the underground stations, which increase capacity, improve economic efficiency of construction methods and reduce interference during construction. The optimisations include the relocation of the eastern underground station to the east side of train station Ostbahnhof and the inclusion of an exploratory and emergency tunnel between the main tubes.

The design of station Hauptbahnhof (Central Station) has also been comprehensively optimised because the city council decided to implement the new underground train line U9. The new line is planned to link the city quarters Theresienwiese and Schwabing passing the Central Station and the Museum quarter and should relieve lines U3 and U6. Underground U9 has not yet been readily planned; however, as a subsequent implementation of a stop at Central Station is not feasible after completion of the regional train's underground station along the 2nd main line and the new station hall above, the future U9 station will already be built as a provisional structure at Central Station. This underground station will directly be integrated into the structure of the new station of the 2nd main line and can, even years later, be developed for operation as soon as construction approval is given.

SSF Ingenieure is part of the engineering joint venture mandated by DB Netz AG since 2017 for design optimisation of the three underground stations Hauptbahnhof, Marienhof and Ostbahnhof. First, a feasibility study to integrate U9 into station Hauptbahnhof was developed and the draft designs of the three stations produced. Moreover, modifications to the construction applications for planning permission of areas 1 and 2 as well as for the third area in the east, newly submitted in November 2019, were produced. Recently, the joint venture has also been assigned the final design for stations Hauptbahnhof and Marienhof.

Within the engineering joint venture, SSF Ingenieure is responsible for structural engineering, coordination between different disciplines and financial management.

More information about the 2nd main line under this link 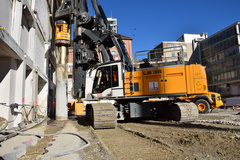