SSF Ingenieure Participation in the EXPO 2010 Project in Shanghai

For the construction of the new German pavilion on a site of approximately 6,700 m2 at Expo 2010 in Shanghai (China), SSF Ingenieure and PECS China, in which SSF Ingenieure holds an interest of 41 %, will provide services for soil mechanics, soil and foundation engineering in order to gather information on the interaction between the foundation soil and building and to define the soil characteristic values required for the calculations. Furthermore, the ground, the groundwater, and the ground air will be examined for harmful contaminations and a risk assessment be prepared regarding the execution of the construction work and later utilisation.

In the middle of the city of Shanghai, not far from the historic and modern downtown area, an exhibition area of 5.28 km2 has been designated as land available for the Expo park and for the construction of the national pavilions.

Construction work at the future EXPO site already began in August 2006. Some of the old industrial facilities that are still there will be partially demolished to make room for the future pavilions, but others will also be partially preserved so that they can be integrated into the EXPO park and be used as exhibition halls.

The industrial estate situated there was partially deconstructed in 2007.

The foundation soil in the area of the future EXPO pavilion consists of river deposits. The necessity of pile foundations cannot be excluded. 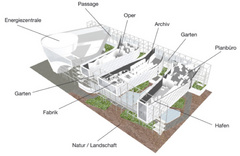