Opening of the Arnulfpark Footbridge

On 23 December 2020, the 242-metre long crossing over 37 railway tracks has been opened after three years of construction. It connects the city quarters Nymphenburg-Neuhausen and Westend-Schwanthalerhöhe improving the network in the heart of Munich. It is situated between the highly frequented bridges Hackerbrücke and Donnersbergerbrücke and is the first separate track-crossing pedestrian and cycle bridge beyond Munich’s big main traffic routes. Moreover, two staircases descending from the bridge provide a direct access to the regional train station Donnersbergerbrücke. As a link to the road network, a spiral ramp was built in an empty plot in the north and a loop ramp in the south. Both ramps are equipped with large staircases and elevators. A transparent noise barrier protects the northern empty plot from noise generated by the railway lines.

Together with the architectural studio Lang Hugger Rampp, SSF Ingenieure won the European-wide competition launched by the City of Munich. The result is a structure with special experience value. When walking on the bridge, its lateral parallel-web Vierendeel trusses widen towards the middle with rising windows. At the same time, the lower webs gradually fold outwards as the piles and the upper web fold inwards. Glass elements attached to the top load-bearing system serve as contact, weather and noise protection and open an unhindered view over the city. They hide the piles and upper web and reflect the sunlight and the sky at different levels of brightness due to the glasses’ changing inclinations along the bridge resulting in a vivid view of the bridge. The glass façade, rising towards the middle, leans to the light and dematerialises the girder’s exterior view. The lower web’s steel side leans away from the light and appears darker and lower towards the middle, so there, the brightness of the glass line leaning towards the light prevails, the darkness tails off which visually highlights the girder and makes it appear light and elegant.

Beginning at Arnulfpark, the bridge was launched over the 37 tracks in five increments on two piles and four temporary supports. Construction has by now been completed and since 23 December 2020 the bridge is open for the public. We’ve successfully completed an exciting construction project – and the city of Munich is better connected with this exceptional new bridge.

For more details about the project and SSF’s services for the Arnulfpark Footbridge follow this link: project. 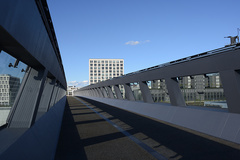 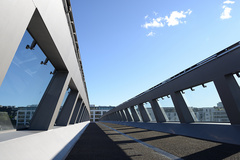 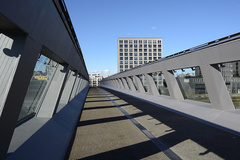