In 2004 the Chinese Ministry of Railways (MOR) decided to test different ballastless track systems on the Suiyu (Suining-Chongqing) test section.

SSF Ingenieure was commissioned to provide the consulting service for planning this section. The MOR selected the renowned design institute Second Survey and Design Institute (SSDI) in Chengdu to prepare the planning concept. SSF Ingenieure was in charge of advising the Chinese colleagues at the SSDI on the special subject of ballastless tracks, checking the planning work, and working out improvement proposals.

The consulting service focussed on the:

But SSF Ingenieure also provided advice on the special features of ballastless tracks of Chinese construction type, such as:

The cooperation with the MOR and the SSDI has developed into a reliable partnership for the Chinese market.

Future projects in inland China, but also in countries abroad,
will be jointly offered by SSDI + SSF. 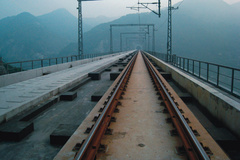