Work in Progress at the Central Railway Line

In April 2017 the contract for consulting services regarding design examination, construction supervision and project management for the construction of the railroad along the Central Railway Line was signed in Dar es Salaam, Tanzania. SSF is part of the multinational consortium led by Korail, the Korean national railway company.

Currently, several steps are undertaken in view of successfully starting project phase I, consisting of on-site inspection of the railway line, building of construction roads, soil analysis as well as completion of infrastructure aiming at a flawless construction execution on the line. The new line runs parallel to the historic central railway from Dar es Salaam, Tanzania’s biggest city at the Indian Ocean, passing the capital of Dodoma before reaching Mwanza at Lake Victoria. In the future, the planning also comprises 1,200 km of railway branch-offs connecting the landlocked countries of Uganda, Rwanda and Burundi.

Link to News from May 2017 Contract Signing in Tanzania 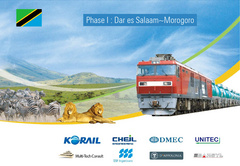