In a couple of months, the Stągiewny bascule bridge will be opened for cars and pedestrians. On 15 March this year, in the heart of Gdansk’s old city, assembly of the steel superstructure began.

The steel superstructure was delivered in three parts to the construction site and placed in its final position by a 500-tonne crane. Due to the very confined assembly area (city centre), the entire assembly process presented a big challenge to the construction company.

Europrojekt Gdańsk S.A. designed the #Stągiewny-Bridge as bascule bridge – the superstructure consists of an orthotropic steel slab folded by a hydraulic system.

Pictures of the ongoing construction

And an animation of the planned bridge 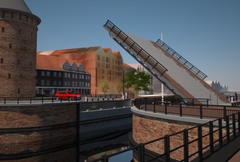