It is the highlight of the new construction of Lenntal viaduct near Hagen in North-Rhine Westphalia and an important day in the history of engineering. On Friday, 5 March, the almost 1000-metres long and around 30,000-tonnes heavy Lenntal viaduct will be launched by around 20 metres into its final position. A very special undertaking as a launching of this scale never took place before.

To maintain traffic flow after demolition of the old bridge, cars and lorries have already been driving over the new bridge for the last four years which, however, stands on temporary piles. The superstructure of the western bridge part will now be placed on new piles. Centimetre by centimetre hydraulically driven steel cables will pull the giant to the right position – approximately three metres per hour the structure will move, slowly and carefully the viaduct will be launched via launching girders into its final position on the final piles. Within one day, launching is planned to be completed.

Before the new viaduct is opened for traffic, the structure will be placed on its final bearings and deck transitions have to be newly built. Completion of the viaduct is planned for June 2021.

For more information and SSF Ingenieure’s scope of services follow this link. 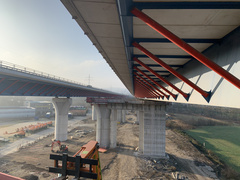 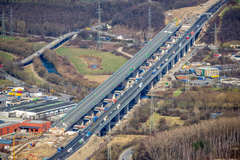 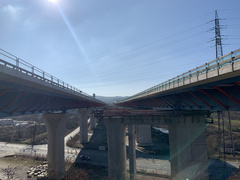