Since autumn 2018, the segment bridge Mühlhausen crosses the town bypass Mühlhausen as part of national road B 299 south of Neumarkt in the district of Upper Palatinate. The 38 metres long bridge is a development of the segment bridge near Greißelbach, which has been completed in 2014 and at the development of which SSF Ingenieure collaborated with the company Max Bögl. Industrially prefabricated and qualitatively high construction segments allow for an even faster, more economically efficient and sustainable construction method. Structural and geometrical simplifications of the segment bridge’s further development lead to higher quality during execution and a longer lifecycle. The Bavarian Chamber of Engineers-Civil honoured the future-oriented pilot bridge Mühlhausen with the first price at the Bavarian Engineering Award, which was handed out on 18 January 2019 in Munich.

The main feature of the innovative segment bridge is the separation of the load-bearing structure into a longitudinal and transversal system and the dryly connected, fully prestressed segments without sealing and asphalt. Two prefabricated composite element girders (VFT-girders) form the main load-bearing system of the bridge Mühlhausen. Above those elements, the 19 longitudinally and transversally prestressed, directly drivable carriageway deck segments made of high-performance concrete complete the 10.10 metre wide bridge erected by modular construction method.

Due to the separation of substructure and superstructure, the carriageway superstructure can be changed or replaced easily and fast. In the carriageway area, the surface has been additionally augmented to make the deck directly drivable. As asphalt and sealings don’t have to be replaced, the new construction method has a decreased need of maintenance compared to common bridge structures.

The segment bridge of the 2nd generation simplifies structural and geometrical aspects of the bridge elements. Qualitative improvements in view of precision during construction, assembly and usage are attained. Moreover, the high degree of prefabrication makes production more cost-efficient and assembly faster so that traffic is only minimally disturbed during construction. 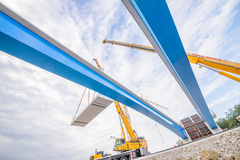 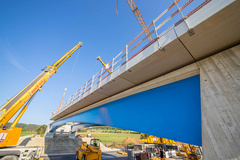 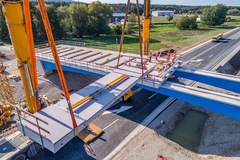 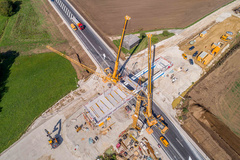 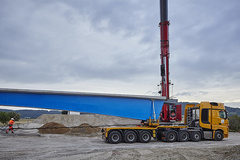 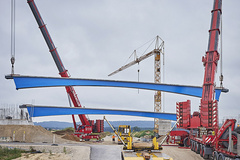