Topping Out Underneath River Spree

In Berlin-Mitte, construction works for the extension of underground U5 are in full swing.

Since 2012, works have been taking place at the gap between station Alexanderplatz and Brandenburger Tour. This section of the underground is 2.2 km long and comprises three new stations: Berliner Rathaus, Museumsinsel und Unter den Linden.

Whilst works are almost completed at stations Rotes Rathaus and Unter den Linden, the most work-intensive station of U5, Museumsinsel, is still under construction. This station differs from the other stations in Berlin’s underground. It is the only one which had to be built by closed method as this section lies partly under the Spree Canal and partly under a building. For construction purposes, the ground had to be frozen underneath the canal. The ground freezing was successfully accomplished by inserting a 105-m-long controlled bore. RBB recently reported on the construction of station Museumsinsel in a fascinating documentary, which can be found under this link: docu.

In the meantime, the topping out ceremony underneath the Spree took place – shell structures of underground station Museumsinsel are completed after six years of construction – now the interior works will begin.

The design of the tunnel and the three stations was established by a design joint venture. SSF Ingenieure is leading partner of the consortium.

All information about the project can be found here: project. 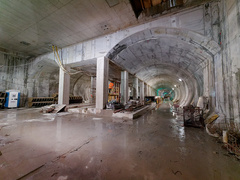 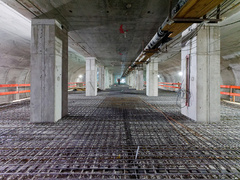 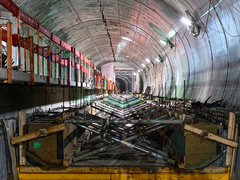