At state road 2070, between the villages Stegen and Eching, an existing prestressed concrete bridge had to be renewed due to structural damages (water inside hollow parts, massive corrosion damage of the reinforcement, etc.) and the too narrow cross section of the pedestrian and cycle lane.

In this area, the road runs parallel to federal motorway A96. The State Construction Authority Weilheim wanted a tied-arch bridge in this area in harmony with the motorway in order to avoid in advance costly pile maintenance at the banks of river Amper. SSF Ingenieure was charged with design and planning of the new bridge.

Firstly, it was examined whether the construction method of the motorway bridges could be copied to the new state road bridge, which was however not possible. The motorway bridges were designed as classical tied-arch bridges. However, at the time, an alternative design was executed which placed the stiffening girders underneath the deck slab. The deck slab spans between those girders and additional longitudinal girders which are fixed to the arch via few projecting cross girders and tie rods. A particularity here is the diversion of the stiffening girder’s tension forces under the bridge. This is done by a truss-like stiffening of the final girders of the girder grid under the deck slab.This construction method requires more height which is not available at the state road. Thus, the new bridge had to be designed as classical tied-arch bridge with outer stiffening girders. The deck slab spans between the low cross girders. The geometry of the existing arches was exactly transferred to the new construction, the tie rods were arranged so that the layers of every 3rd rod match the existing ones.

The State Construction Authority Weilheim and the Authority of Motorways South Bavaria agreed to divert traffic of all four motorway lanes to the northern motorway arch bridge during construction and allocate the southern bridge to state road, pedestrian and cyclist traffic. A condition for this traffic solution was to limit construction to one season. The Authority of Motorways generally excludes traffic diversions during the snowy South Bavarian winters in favour of unobstructed winter service.This resulted in a short construction time with parallel erection of both abutments on large bored piles and subsequent mounting of the steel arches and cross girders on temporary supports at the existing pile axes. After that, the deck slab was built on prefabricated slabs. After completion of the bridge caps, sealing and road surface, drainage, railings and remaining works, the bridge has been opened for traffic on time in December 2020. The successful result and the timely completion are mostly due to the trusting cooperation and joint commitment of developer, designer and executing construction companies Ing. Hans Bodner and Raffl Stahlbau. 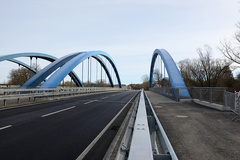 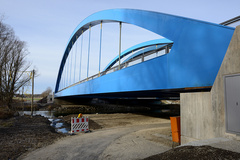 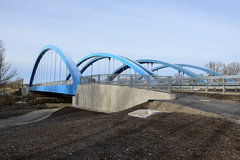 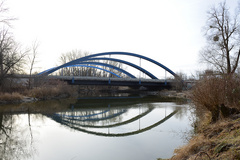 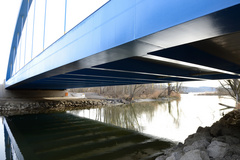