In total six bridges, selected amongst 29 contributions submitted for the competition, are nominated for the German Bridge Construction Prize 2018 in the categories road and railway bridges as well as pedestrian and cycle bridges. The pilot structure Greißelbach designed at SSF Ingenieure is one of the selected bridges.

According to the jury, the bridge near Greißelbach over national road B299 in the district Neumarkt/Oberpfalz is a model project for the efficient replacement of aging road infrastructure. The pilot structure, designed and implemented together with the company Max Bögl, is an example of modular construction demonstrating sustainable and economically efficient construction with prefabricated components.

Main feature of the construction method is the separation of load-bearing structure in longitudinal and transversal system and the dry-connected, fully prestressed segments without sealing or asphalt. The pilot bridge Greißelbach has already received recognition during the German Engineering Award in 2016.

The award ceremony of the German Bridge Construction Prize during which the winners of both categories will be announced will take place on March 12, 2018 in Dresden. The prize is awarded every two years under the patronage of the German Ministry of Transport. 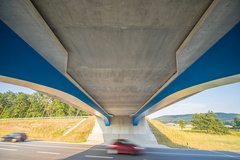