Underground station Sendlinger Tor is one of the most frequented key stations within Munich’s urban transport network. Since the station’s construction in 1971 and its expansion in 1980, the city has massively grown, and passenger volume tripled subsequently. The 40-year old station was not designed for those dimensions. Moreover, rain and salty melt water caused damages to the concrete.

Since the last four years, the station has been entirely renovated, modernised, re-designed and made barrier-free and optimised in terms of fire protection. Our new project folder “Modernisation of underground station Sendlinger Tor” comprehensively outlines the entire conversion of the more than 40-year old structure into a progressive station of the future and shows the challenges and particularities of the construction project in an extremely confined space and with ongoing underground operation.

Under this link you can browse through the folder and download it (German edition). 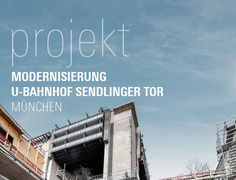