Construction works at Munich’s 2nd main city railway line advance rapidly. At Marienhof, one of the new tunnel stations of the 2nd line in the heart of Munich, foundation engineering is almost completed. Last month, the final of in total 50 primary supports were built. Up to 70-metre deep bores were executed for that. The lower 25 metres of the bore holes were filled with concrete, and on top, up to 36-tonne heavy steel girders were erected. The concreted part of the primary supports will form the foundation of the platforms. The steel girders are only temporary supports of the suspended ceilings during construction and will be removed subsequently.

Already at the end of last year, diaphragm walls – the final outer shells of station Marienhof – were constructed. These walls reach 55 metres into the ground.

At Marienhof, however, it is not only about depth but also about height. Since the beginning of this year, an over 75-meter high crane is used to complete the heavy work for construction of the station part of Munich’s 2nd main railway line in the heart of the city. Even if it barely reaches the height of Munich’s cathedral and its 100-metre high towers, it clearly stands out from the skyline and will shape it in the next years. The crane can move very heavy loads over the construction site: from steel supports to prefabricated concrete components and tunnel construction machinery.

For more information about the construction project 2nd main city railway line and SSF’s scope of services follow this link. 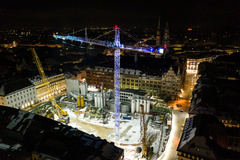 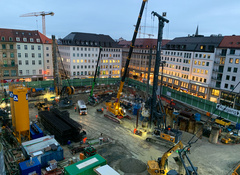 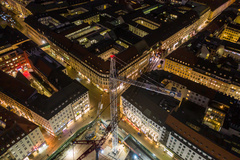 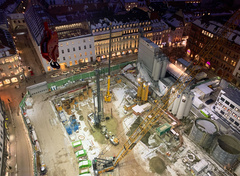