To optimise the connection of the central African back country to the million-strong metropolis and port city Dar es Salaam, Tanzania is building a modern railway line. The line runs on 1,200 kilometres along the historic standard gauge railway, which was built during German colonial times between Dar es Salaam at the Indian Ocean and Mwanza at Lake Victoria.

In 2017, construction works at lots 1 and 2 started, which run on 641 kilometres until Tanzania’s administrative capital Dodoma. SSF is part of the Korail Joint Venture under the lead of the Korean railway company Kore Railroad Corporation as a partner responsible for project management consultancy and FIDIC engineer for plan verification, construction management and supervision focused on engineering structures, electrification, signalling and telecommunications technology.

On 30 January 2021, the project for lot 5 started in Mwanza with great media coverage. It comprises the design and construction of another 249-km long electrified railway line between the city of Isaka in central Tanzania and Mwanza, the country’s second largest city. Contrary to lots 1 and 2, built by the Turkish company Yapı Merkezi İnşaat, this lot was awarded to the Chinese consortium China Civil Engineering Corporation (CCECC) and China Railway Construction Corporation (CRCC). At the middle of March, the Korail joint venture received the “Letter to Commence”; and henceforth, SSF is again a partner company working as project management consultant and FIDIC engineer.

We wish plenty of success to the team on site in view of a high-qualitative and on-time progression of construction works.

A current progression video of lots 1 can be found here. 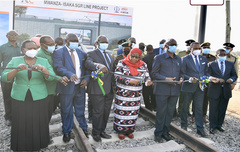 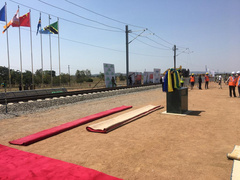