Interdisciplinary cooperation for the conversion of Tunnel Allach

For car drivers it’s a regular test of patience: the 1,060-metre long tunnel Allach at motorway A99 in the northwest of Munich. During peak periods, around 180,000 vehicles pass the tunnel per day, which makes it the bottleneck in the Munich region. Despite being 30 years “young”, the tunnel is not built for today’s traffic volume; which is why the upgrade from six to eight lanes is planned. As an interim solution, the hard-shoulder in both directions will be released for traffic.

For this temporary hard-shoulder release, the Authority of Motorways South Bavaria establishes a feasibility study and preliminary design; currently, the documents for planning permission are produced. Wagner Ingenieure, a member of the SSF Group, is involved in this design. SSF Ingenieure will comprehensively and interdisciplinary accompany the design until planning permission is completed, produce a 3D model, integrate the as-is state and the design, and monitor services of all specialist disciplines. The biggest challenge: The conversion has to be accomplished while motorway traffic is running, thus operation has to be maintained permanently and be functioning during all construction phases. 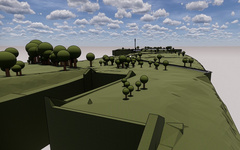