Impressive Bridge over Motorway A3

Due to high traffic loads, federal motorway A3 between Aschaffenburg and Biebelried will be expanded to six lanes on a length of 96km. The section west of intersection Rohrbrunn until viaduct Haseltal, the relocation of A3 and the federal road 2312 crossing at an extremely oblique angle, required a new bridge which had to be built without central supports due to the curvature of the motorway. The bridge is situated at the highest point of the federal motorway in the Spessart and, moreover, in direct view of the rest and service are Spessart. The client, represented by the Authority of Motorways North Bavaria, asked in this exposed location for a “landmark” – a specially designed structure.

During a design competition at which several engineering offices participated, the “mono-arch” stood out. At a mono-arch, the arch structure crosses almost perpendicularly the motorway and diagonally the superstructure and thus counteracts from a structural and visual point of view the obliqueness of the bridge.

The regularly arranged suspension cables allow a very slenderly designed bridge deck which unfolds its appeal from every viewing angle. The superstructure, designed as an oblique girder grid in composite construction method, could be implemented with a slenderness of l/h = 82.0 at a span width of 108.30 m.

The bridge was completed at the beginning of 2018 and opened for traffic. Next week, on 19/11/2019, the area of the motorway underneath the mono-arch will be opened during a ceremony.

For more information on the project see here: project. 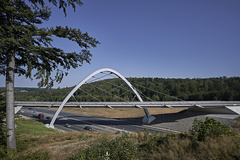 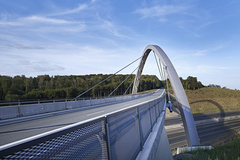 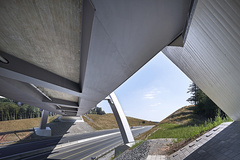 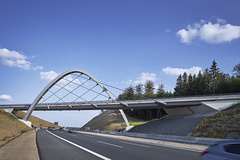 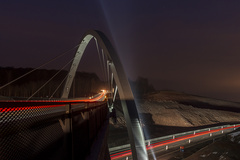 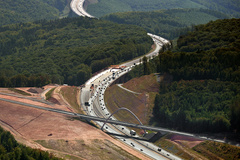