The newly built DB railway line between Wendlingen and Ulm crosses the Filstal valley. For the project participants, the required viaduct presents special boundary conditions because of the tunnel-bridge-tunnel sequence within the existing topography of the Filstal with its very steep valley sides.

The connecting tunnels with 30 metres track distance require two independent bridges. Thus, two single-tracked bridge structures have been designed as jointless continuous girders of 485 m and 472 m length, reaching over six spans and built by semi-integral construction method. In the area of the Y-shaped main piers, the arch is shaped with flatly inclined oblique struts. The superstructure is a single-cell hollow box, prestressed in longitudinal direction and mildly reinforced in transverse direction. The third highest railway viaduct in Germany crosses the Filstal valley with a clear height of 75 m. The larges span width amounts to 150 m.

A big challenge during design and construction was the formation of the monolithic connections as well as the longitudinal force distribution of the semi-integral structure with its slender piers.

The project will soon be completed – at the end of 2022 both tracks will be operated. Currently, high-speed tests are run on the right track bridge, and the left track’s superstructure is under construction.

More information about the project can be found here. 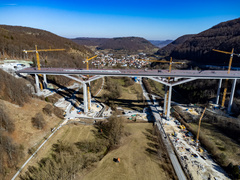 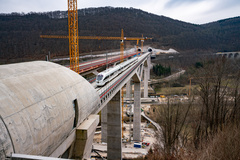 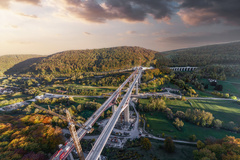