With help from SSF Ingenieure, the expansion of metro line 5 in São Paulo is progressing. At the beginning of the year, the section between Santa Amaro and Brooklin has been put into service. SSF Ingenieure, together with Planservi Engenharia, designed on site the connecting metro line until the terminal Chácara Klabin. The line is currently under test operation and this last section is planned to be put into service in October 2018.

The section designed by SSF between the stations Camp Belo and Chácara Klabin is approximately six kilometres long and comprises six stations and ten switches. Around 80 percent of the ballastless track have been implemented as vibration protection, a so-called mass-spring system. It is a heavy mass-spring system with frequencies of 4.9 Hz to 14 Hertz. In this system, the “heavy” track slab made of reinforced concrete is placed on individual bearings or steel springs to protect the adjoining buildings from vibrations. Moreover, in the area of the São Paulo Hospital, absorbers have been installed in the ballastless track in order to guarantee highest possible vibration protection and to minimise the effect on the sensitive medical devices in the hospital.

After opening the last station Chácara Klabin, Line 5 will comprise in total 20 kilometres and 17 stations and, starting at station Capão Redondo, connect São Paulo’s southwest with the city centre. At the same time the expansion provides passengers with connections to Lines 1, 2 and 17.

Image 1 and 2: The completed ballastless track of the metro line before lifting.
Image 2 and 3: Switch area under construction: The installed steel springs cushion the deck slab on top. 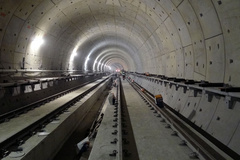 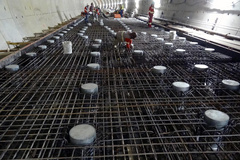