The city of Augsburg plans to create a more efficient and attractive public transport system. Under the name “mobility hub Augsburg”, the required construction projects comprise several coordinated individual projects. One of those is the conversion of Augsburg’s central station into a barrier-free and modern hub, inside of which all rail transport runs, optimally harmonised, on three levels: On the top level, the platforms of Deutsche Bahn, on the lower level, the area of a new tram station, and at the distribution level in between, the barrier-free connection of both rail systems via elevators and escalators.

Since 2017, six railway bridges have been built as monolithic frame structures with access to platforms A to F (bored piles, abutments, superstructures). After erection of one bridge, it was operated again and the next bridge section was closed for construction. Subsequently to the bridges, construction of the lower levels including tramway and distribution level commenced.

Recently an important milestone was reached. The underpass of Augsburg central station and its platforms to create a tram station at level 2 was – besides some remaining works at platform A – completed. Upgrading works have started, the distribution level (level 1) is planned to open in August 2023, the tramway level likely in August 2024. The building is divided into three larger blocks with lengths of 25 to 35 m. A characteristic feature of the lower level are the V-columns made of exposed concrete. Most of the wall surfaces and superstructures’ undersides of the distribution level are as well built with exposed concrete.

More information about the project and SSF’s services: project. 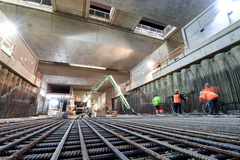 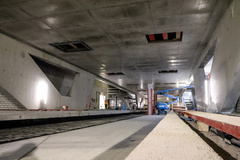 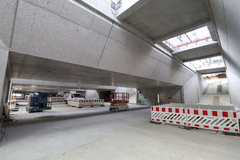