Implementation of bridge superstructures in weeks instead of months and years

In Rumania, in the heart of Transylvania, motorway A10 Sebes – Alba Julia – Turda is built to link motorways A1 and A3.

The engineering office SSF RO, member of the SSF Group, received the contract from company AKTOR S.A., the technical lead of the joint venture, to produce draft and final design of twelve engineering structures that are part of motorway A10; amongst them two bridges over Mures River, nine overpasses and seven culverts.

The two Mures Bridges are built by VTR (composite girder grid) modular construction method, which uses a composite girder grid (VTR) made of prefabricated modules for the deck bridge’s superstructures. This construction method was chosen to reduce costs by industrial production at a fixed location, increase quality, minimise works on the construction site and achieve significantly shorter construction times. The superstructure consists of three modules: longitudinal steel girder, placed on the reinforced concrete cross girders and connected to a girder grid. The slab modules of the carriageway are placed onto the girder grid. The modules are interconnected by grouting of the joints with in-situ concrete.

During construction of the first of the two Mures Bridges, the economic efficiency, fast construction and qualitative construction method were fully confirmed.

SSF scope of services: draft and final design of twelve bridges as well as quality assurance by monitoring module suppliers and the executing company on site 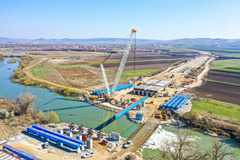 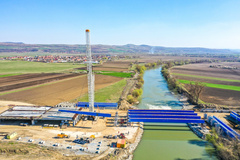 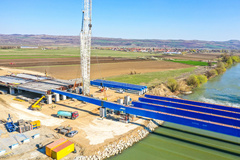 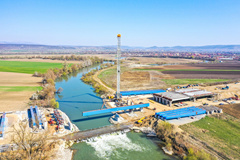 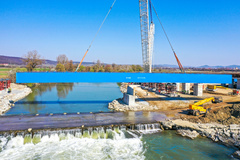 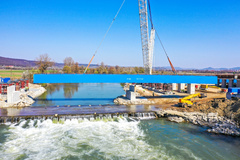