Half-time under the Bay of Kiel

Rehabilitation of the supply tunnel under the Bay of Kiel

The supply tunnel that is undergoing rehabilitation connects the east banks of the Bay of Kiel with its west banks and supplies the city quarters lying west of the Bay with district heating from the power plant installed at the east banks.
The existing 1368 m long supply tunnel is rehabilitated by producing a new inner formwork consisting of concrete pipes. The concrete pipes are launched starting at the east shaft and are pushed throughout the whole tunnel length on a launching track.

By using this method it is possible to leave the existing heat pipes in the tunnel during construction and thus limit construction time. After the foreseen construction period between May and September 2009 district heating pipelines are put back into operation.

At present launching works take place; until June 26th 2009 about 850 m of the inner formwork have been inserted. 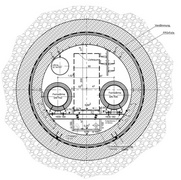 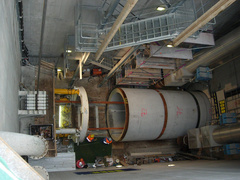