Together with the new construction of the luxury mall “Complexo JK” in São Paulo – Zona Sudoeste –, the access situation was newly designed by connecting Avenida Presidente Juscelino Kubitschek with the major traffic lane of Marginal Pinheiros / Avenida das Nações Unidas – one of São Paulo’s main traffic roads – by a newly built fly over (Viaduto).

The strongly bend bridge made of prestressed concrete, forming a curve in the ground plan (inner radius 55 m) and a crest in the elevation, holds 2 traffic lanes. The bridge is built as semi-integral structure, connected to both abutments and with dynamic abutment formations. The span widths of the 5-span structure are at maximum 35 m. The fly over including ramps is in total around 274 m long.

In addition to typical design criteria, the conception and aesthetics of the structure are of essential importance as the bridge is meant to reflect the high-class ambiance of the new shopping mall. The side views on the Viaduto’s superstructure as well as the bottom view of the superstructure are entirely covered with perforated aluminium sheets with integrated LED light bands or LED spots. The guards rails made of New-Jersey profiles are faced with perforated sheets, too. These sheeting elements are also equipped with LED lighting.
The complex geometry, the situation of the construction site in the middle of the traffic area and the high demands placed on the design require detailed work preparation.
Because of the complicated traffic connections and the high traffic density, the bridge will be erected during three shifts. 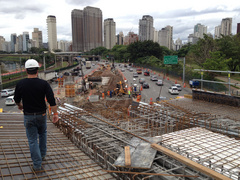 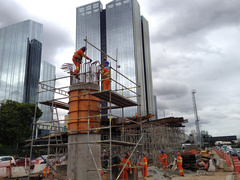