On May 30, 2015, the level crossing Rangsdorf in the south of Berlin on the railway line Berlin-Dresden has been forever closed.

Replacing level crossings is an important requirement in view of expanding the high-speed lines in the trans-European network.

The level crossing in the city centre is replaced by a four-tracked, 57-gon oblique railway bridge over a newly built road trough with elevated pedestrian and cyclist path on one side. At the same time, the directly adjoining station Rangsdorf was converted; a project that required to newly arrange the tracks, renew the platforms and build new access structures. The railway bridge was constructed by top-down method. Additionally, a road bridge crosses the trough structure.

SSF was responsible for general planning of all work phases as per HOAI (German official scale of fees for architects and engineers). 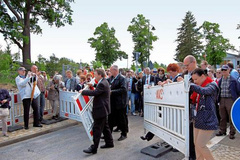