Decision on Competition for Danube Bridge in Linz

The joint venture of participants with SSF Ingenieure received the recognition award for 4th place.

On Wednesday 17th September, 2014, the 14 judges decided on the solution for the new Danube Bridge in Linz. The recognition award for 4th place of the Linz bridge competition was given to the joint venture of participants formed by SSF Ingenieure AG, ISP ZT GmbH and Knights Architects.

In accordance with the concept, the design plans a network arch bridge over the Danube. Architecture and width of the superstructure’s cross section resulted in lateral and central load-bearing systems, with cycle paths and footpaths attached on the outside as cantilever constructions.

To emphasize the distinctive appearance of the new Danube Bridge and to not interfere into ship traffic on the Danube, the load-bearing structure crosses the river with a span width of 250 m without supporting piles. The truss effect of the network arch makes the architecturally desired slender appearance of the arch structure possible. 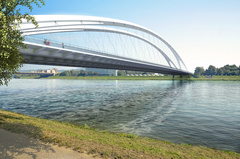 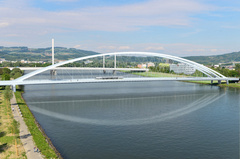 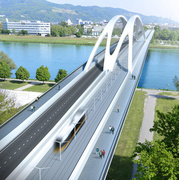 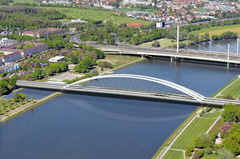 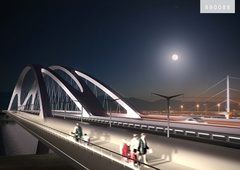