In 2012/2013 the City of Munich held a competition for a pedestrian and cycle bridge crossing the central railway axis at the regional train station Donnersbergerbrücke. Developed together with the architects from Lang Hugger Rampp, Munich, SSF Ingenieure AG’s concept of a discrete Vierendeel bridge won 1st place. The orthotropic deck bordered by two lateral girders stretches with a total length of 242m over 37 tracks of the railway installation. For the turbulent railway area, a calm construction was deliberately chosen with girders with parallel chords and vertical struts. A closer look reveals dynamic elements like an almost horizontal bend of the girders that, due to the crest-like form of the bridge, starts at the top of the abutments and runs downwards in the middle of the bridge. Above this line, the girder has openings. This area is covered by a closed glass surface. Underneath this line metal walls are visible.

Caused by the changing actions of light during the day, the different materials create alternating light reflections and different moods.

A structural particularity is the launching of the superstructure from the north which is planned without temporary supports but temporary pylons over the three spans with span widths of up to 93m. 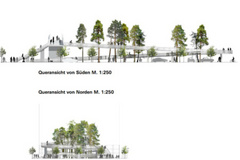 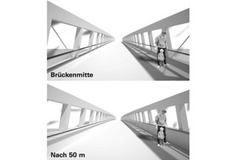 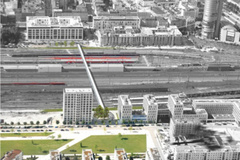 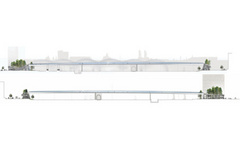