Official commencement of construction of the New Rhine Bridge near Kehl

With the commencement of the construction of the New Rhine Bridge near Kehl, the initial work on the approximately 14-kilometre route between Kehl and Appenweier of the high-speed railway connection Paris – Eastern France – Southern Germany (German abbrev.: POS) will officially begin. This is a joint project of the Federal Republic of Germany and the Republic of France.

Planned as a steel framework with a length of 238 metres, the new double-track bridge replaces a single-track structure that was built in 1954. In addition to increasing the capacity and speed at which the trains can drive over the bridge, the navigating conditions are also to be improved by increasing the overall height above the water line. The bridge is equipped with a superstructure as ballastless tracks.

The execution planning was carried out on behalf of the company Max Bögl, Neumarkt, according to a secondary offer worked out by SSF Ingenieure which includes both the substructure and the superstructure.

Completion is scheduled for 2010. 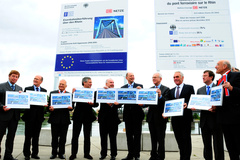