Transversal launching on a length of almost 1,000 meters.

The 990m long Lennetal Viaduct is part of the six-lane expansion, which is currently planned and designed, of motorway A45 between Westhofen and Hagen, and will be replaced in the next five years by a new structure.

Construction is executed in five construction phases and will take place without influencing traffic flow due to the bridge’s planned temporary location as well as temporary piles.

The new bridge consists of two structures with a span width of 981.50 meters over 14 spans, which are each supported by two piles. The superstructure comprises a closed hollow steel box with laterally arranged compression struts and a solid deck slab made of reinforced concrete. 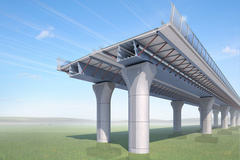 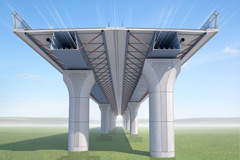 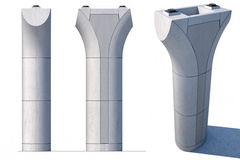