Harbour crossing/Tunnel under the Dead Vistula

On Monday, June 9th, 2014, it was formerly announced that the tunnel boring machine (TBM) “Damroka” has reached the reception pit of the second tunnel tube after further 3 month. The vice prime minister Mrs. Elżbieta Bieńkowska, name giver of the TBM, and Mr. Martin Herrenknecht attended the event.

At the end of last year, the logistic skill of the construction company was needed. After completion of the first tube, the tunnel boring machine had to be transported back to the launching pit Ku Ujściu. The TBM travelled back through the finished tunnel whilst the shield was transported above ground. Further boring works started at the beginning of March. In parallel, finishing works in the completed tube were executed.

The general scope of services of SSF Ingenieure AG, in joint venture with EUROPROJEKT Gdansk and in close cooperation with Wagner Ingenieure Munich, comprises the overall design until final design.

04/2016 Tunnel underneath the Dead Vistula opened for traffic 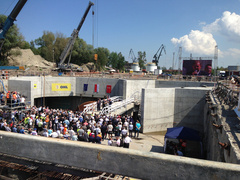 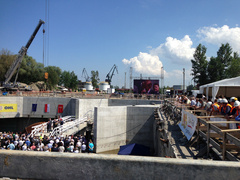 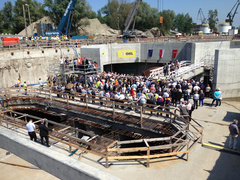 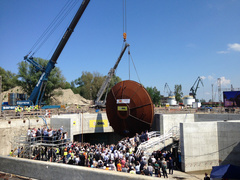